Jacob has been bopped before, lol. At least a few of Bowman’s lessons must have stuck.

Meanwhile Dean is dangling on a thread swinging his knife and trying to be intimidating and it just isn’t working out for him.

It’ll be impossible to know until we get there! It really depends on what AUs are in the lounge, who’s around at the time, and not even we know until we find out the order the AUs get voted in by everyone!

Sorry about that! There’s been a lot going on, so asks are getting posted a bit slower than normal. Lots of family drama, deaths, disasters, the one vacation of the summer I get.

We’ll have to see if they forgive him for it!

If you mean teddy sized to some humans (like a foot tall or thereabouts), for both Bobby Loran and Chase Lisong, I think the first reaction would be something like “What the fuck, dude.”

Chase would tease, but he’d be more likely to notice that Jacob is freaked out and try to also focus on getting him back to normal. Y’know, still messing with him here and there but also recognizing that it’s kinda scary.

Bobby would probably tease him a lot more. Pushing the little guy around in his fascination over the change. None of them are really used to Jacob not being the biggest and strongest of the group. Bobby might get a little carried away, but Chase would step in to tell him off before long.

If you mean extra smol Jacob (teddy sized to little guys like Sam), Jacob would have to really hope no one’s first reaction is to grab. It’s way too easy to accidentally hurt him at that size.

The humming, and eventually, the singing along, seemed so strange to Jacob. It was a casual reminder that for Dean, driving around like this was no huge deal at all. He could pick up and leave to wherever he wanted at any time. Jacob remembered enjoying road trips. In fact, he’d been on one when he was cursed by that witch and condemned to live at the size of a finger.

Jacob frowned as the sound of Dean’s singing along rumbled out of the chest he sat next to. It practically drowned out the sound of the radio, despite being somewhat quiet by Dean’s standards. Without even thinking about it, Jacob jabbed an elbow into Dean’s chest in disapproval of his rendition.

He immediately regretted it. Jacob had seen Dean smirk at him being defiant before, when the human found him punching the vase to be very entertaining. But he’d also had the vase slammed back down around him when he tried to escape, nearly taking his hands off in the process. There was no way to know how Dean would react. 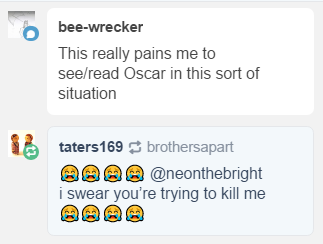 It’s tough on me to write it, believe me! I hope one day you’ll forgive me for sharing the pain. ;w;

His colt, and a bit of extra ammo! He’s prepared for emergencies, but he’s going to have to take very good care of that gun since he has no supplies to clean it or repair it.

You’ll all see more Brothers Saved for sure 😉 I have a bit of the next part sketched out, though it’s still between Sam and Dean at the moment, with John and Bobby to come back in during future parts.

Dean’s independence is going to have a hard time with letting Sam carry him everywhere, so we’ll have to see how he reacts!

There’s no real way to know how everything will go down without it written, so we’ll just have to wait and see! John, Dean and Sam are all strong personalities, it’s impossible to predict reactions prematurely.

;w; Poor smol child. Dean is so torn between his independence and his loyalty to his family. It’ll be a hard moment for him, but he’s got Sam around to help lessen the impact (or explode at John like the independent kid he is).

You’ll see this coming up!

That really depends on the little in question. For instance, Bree isn’t going to mind one bit. She’s used to contact with humans, and considers it completely normal. Oscar, on the other hand, has never really had close contact with humans and is always baffled when Dean insists on messing with his mousy hair.

Dean as a little will be completely offended that someone is messing with his spike, while Sam is resigned, considering how often Dean fluffs it into a mess. Dean’s way of saying you should really cut this.

Oh, I like this idea! If anyone wants to, send us in a scenario and the characters. As always with prompts, if we can come up with anything, we’ll write and post it for everyone to see! A bit of character swap to go around.