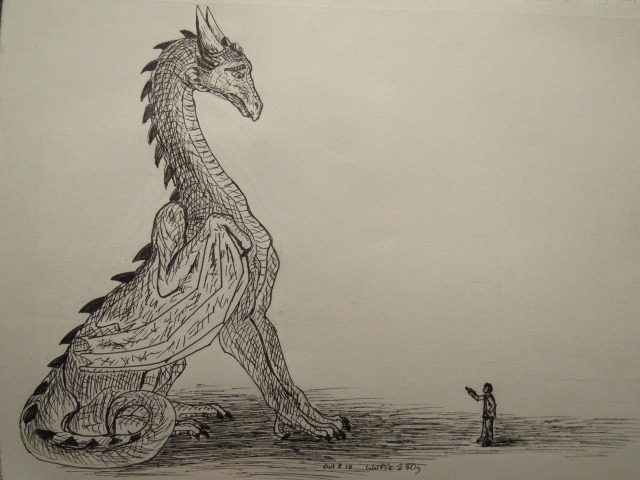 Dragon!Dean is Still Scared of Heights – on deviantart

Sams looking through the lore to try and fix dean. Deans getting bored, unable to help in his giant state. Not a great combo;)

“It is nice to breathe air that isn’t recycled,” said Stan genuinely. With another long inhale, he carefully maneuvered himself a little closer to the front of Dean’s shoulder, setting himself down between the collar and his neck and curiously peeking out in the direction Dean was heading. Once he even dared to glance down the sheer cliff Dean’s torso made, see those massive legs swing out to carry his unfathomable weight forward another step.

For the one brief second Stan got to see that, it was both fascinating and terrifying.

If he hadn’t shrunk Dean back down, they’d have a lot of work to figure out how to get him back to normal.

Sam and Dean couldn’t interact with each other reliably at that scale difference. They’d need Bobby to help soften the blow between them.

The curse Celeste used on Dean was not the same as the one that she used on Sam. This one was a standard witch spell.

Though in Brothers Apart we see her angelic soulbound curse used most often, there are other styles and types of magic and curses that can change sizes, either larger or smaller. The reason she used hers on the borrower population was because the angelic grace imbued in them strengthens the host body, and she’s growing an army of hosts and in particular, looking for a strong one for her brother to use.

Dean’s curse was easily lifted and removed. If they had to wait until later, a simple cleansing spell would have worked.

It would be painful, though. Crunching down to normal size all at once.

You will see other size changes happen in the BA multiverse.

(Story 1 of the Brothers Together series)

What if instead of Walt and Mallory rescuing Sam when he got cursed, Dean and John were able to find him before the witch took off?

(Story 4 of the Brothers Found series)

Did you know that you and Dean-O are the first humans in over a generation to actually manage to befriend little guys like Sam and Bowman? I mean, sure. Dean had a bit of a leg up there with Sam actually being his brother, but there have been other families in the past split by size like that and they never bothered with each other again.

Sam wakes up out in the open in a motel room and doesn’t know at first where he is. Takes place directly after Chasing Family.

(Story 1 of the Brothers Found series)

Four inch tall Sam Winchester’s family needs food and all he can find is a cracker dropped on the floor in a room with a human.

How hard can it be to grab it before he’s seen and vanish back into the walls?

After a forced relocation from Trails West, new information surfaces about the witch the brothers have sought for years, throwing them all into a confrontation they weren’t prepared for, and could never have expected.

(Story 13 of the Brothers Apart series)

A call in the middle of the night summons Sam and Dean back to Sam’s old home, Trails West. What is stalking their family in the motel, and what lengths will Dean have to go to in order to stop it?