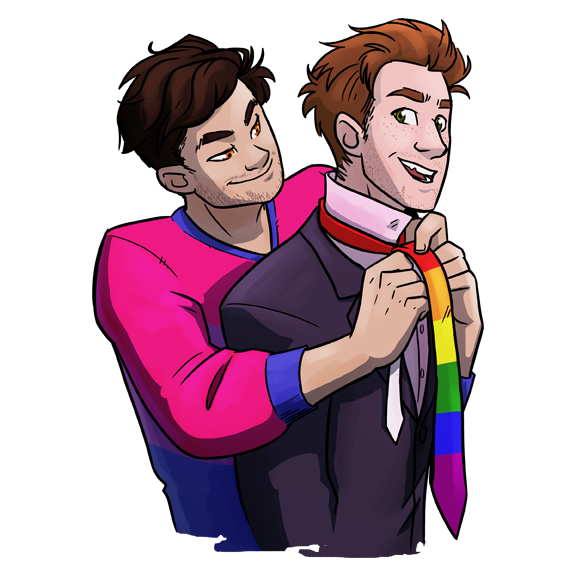 “We both know you know how to tie a tie.”
“Ah, I see you’ve seen through my brilliant plan to lure you close!”
“Like I need convincing.”

Artwork by the fabulous @lotminx, much love to them!

This one required much deep thought, so it took a little longer to answer compared to normal.

He is not actively social, but he is action-oriented. If something’s about to happen, he’s going to be there whether he wants to or not. He has a strong sense of duty (including to his more gigantic family members he seems to pick up), and will take charge if it is needed.

Not adventurous at all, but gets dragged into adventures anyway.

Neither sprite is human, and their personalities, though clashing, each lack something that humans have in them. Nixie is an empath but lacks any decisive abilities. Her life is following orders, whether it be through a summons or through a binding spell. This often makes her more of an automaton than any human would be. Ilyana, on the other hand, lacks empathy and understanding for anyone who isn’t a sprite. She and the other fire sprites are sociopathic, but only to non-sprites.

Warm and understanding, her curiosity and desire to grow coincides well with her older adopted brothers. They enjoy teaching her what they can as much as she wants to learn it.

Sometimes, her determination is stronger than their stubbornness.

( @neonthewrite is I and F, but landed in the middle between S/N and J/P )

Jacob is friendly, but he doesn’t necessarily seek out new people spontaneously. He’s very go-with-the-flow, and he’s far for perceptive than people might first think from looking at him. He’s loyal and makes an effort to be calm and patient with people. He embodies chill.

Bowman’s harder to pin down as far as MBTI types go. He’s brash and loud and quite willing to jump into an argument, with a lot of focus on the here and now, the concrete facts that he has available to him. Even so, he’s flexible and able to take in new information well, even if he grumbles about it. He’s a good problem solver, and tenacious as all get out.

Despite having such a similar type to Jacob, Oscar has some key differences. He’s much more dependent on some form of organization to keep himself grounded, and he’s afraid of new people in most cases. Even so, he idealizes the thought of being calm, even if he’s very much not. Keeping structure in his life is paramount to his emotional well-being.

He is a natural and inspirational leader, and makes friends easily, particularly with people he works with. He reads people well, sees their inner potential, and does what he can to bring that potential to fruition. Full of warmth and empathy, he sees emotional needs in others and often is the one to help them through it and learn to grow from it.

No problem at all! I don’t think we’ve actually had it come up before!

I like the action, the scenes that leave your heart pounding. The more emotionally charged it is, and the faster things go, the better. Sometimes I need help calming it down because the tension gets so thick it might just snap me. Anything heavy in feelings or heavy in action is my jam, I might start to fade out on the calm, chill scenes between those.

I also quite enjoy designing cases or monsters, and layering up my OCs with surprising background tidbits.

I just really enjoy working with my cowriters in general, if I’m completely honest. They get me through the hellish work days!

But for specifics, I’m a lore nerd and also an interaction junkie. I like pitting characters against each other to see how their personalities will bounce off each other. It’s great to have the characters just take off on us because their chemistry works well.

I agree, the character interactions are always fun with this group of writers, but a lot of the time, the parts that make me weak involve the g/t interactions. There are so many size combos between all the characters the three of us share, and all of them react differently to being smol or lorge, and it’s just so fun to toss em at each other or watch them get tossed. Drama is always certain with these dorks.

I can’t help it, I’m a diehard sucker for tols and tiny folk.

We’re glad to have you along! BC will be a fun ride for everyone.

Just remember– All canon characters start out as OCs, and the OCs in the various Brothers Apart verses are all considered canon characters for that series. They’re not going anywhere anytime soon, and you’ll be seeing more than a few OCs in Brothers Consulted once the story really gets going.

This AU will not feature any OCs!

Though there will be OCs appearing in the future that may or may not have been seen before, all the main characters will be known and popular characters.

Have a guess for the new AU? Send it in! 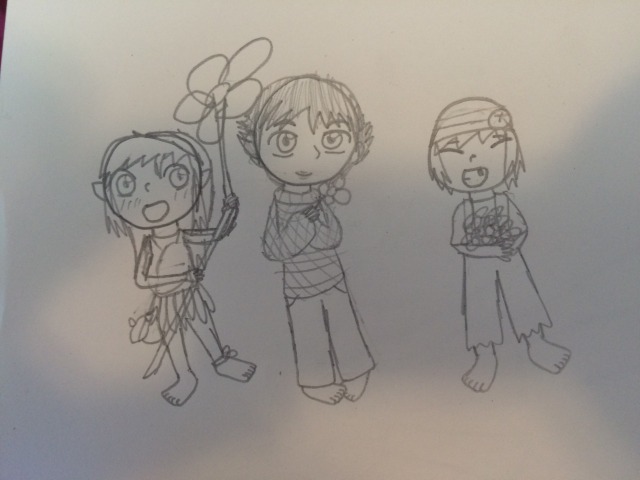 Here’s some fan art I made for @brothersapart, an excellent G/t Supernatural story. Here we have Oscar, a borrower kid, collecting flowers with my two OCs- Tommy (on the left), and Orchid (the girl on the right, who was designed by @thewindmagevaati). Obviously, Orchid went above and beyond with her collecting.

Hmm, this is a tricky question. I do have female OCs, but it’s not likely they’ll play a large part in this story at any time. Beth and Isabelle aren’t likely to be seen again in the story, and Evelina wouldn’t fit. Unless the story goes for a few more (Supernatural) years, we won’t be seeing Charlie much either. Of course, Mina and Celeste can appear back in the story at any time, so there’s a possibility for you!

This series will be a collab with neon, so it will definitely have one of her OC’s costarring in it with my brothers!

Anyone who’s unfamiliar with them, check them out here.

It is indeed! Brothers Unexpected will be cowritten by @neonthewrite. I will handle the Winchesters and any other supernatural characters that mosey on in, and she will field her OCs. Maybe I’ll even have an OC of my own pop up one day XD