“Oh?” Sam said blandly. "Are you sure you weren’t imagining these ‘other sprites?’ I know people like me are easy to mistake… I’ve heard house elves, gnomes, borrowers… sprites is a new one…”

He received a flat look in return. “I didn’t know what the fuck you were,” Logan assured him. “Still don’t. But you’re not a sprite, that’s for damn sure.”

(Story 11 of the Brothers Apart series)

Bowman lets Jacob know just what threat the Wellwood faced while he was away, and Jacob doesn’t quite believe him.

(Story 10 of the Brothers Apart series)

What happens when you have Winchesters in the Wellwood? A bad day for Bowman Leafwing, as an encounter with a certain hunter and his brother goes awry, and zombie wolves move into the forest.

“I never pulled the wings off a dragonfly, but a sprite? I’d do it in a heartbeat, and if you knew what they can do you’d be the same.”

Bobby shook his head as he stabbed SEND with his thumb. “You are one twisted son of a bitch,” he said to Logan before turning away as the phone rang. 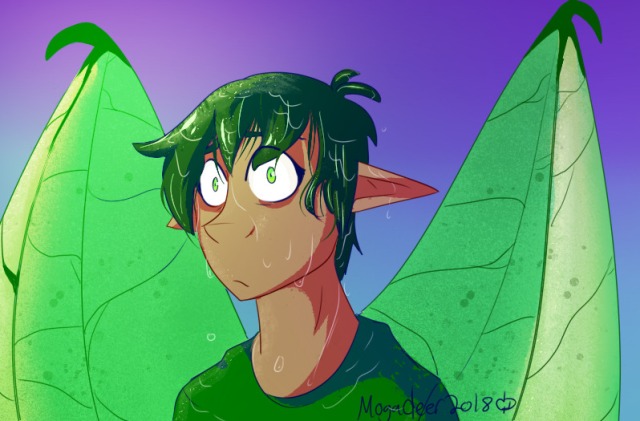 Harnessed all that ‘GOTTA ART BEFORE I LEAVE’ energy and managed to finish coloring this guy! A commission for @nightmares06, who wanted a sketch I’d done last year around September to be polished.

Thank you for being so patient with me! I hope you like it, and if you want anything tweaked, lemme know!

If smol Jacob can lift about 40x his weight, I’d say a regular borrower averages 10 to 15x. The brothers, being determined to keep physically fit, are likely around the 12 to 13x range. Once they get better nutrition, they’ll easily hit around 17 or 18x their weight in strength, if not more.

Really, the questions is: how long does it take the sprites to realize they should just start flying and lift the brothers off the ground so they can’t get any traction?

With wings, they’d just go with that route. Lift up the brothers while Jacob watches, unable to hide his snickering (Dean will get revenge on him, somehow). At least they’re good at dangling from a rope.

If they weren’t allowed to use wings except maybe to balance themselves, it probably wouldn’t take much for the brothers to knock several knights over, one by one. Sprites aren’t nearly as strong as one of the brothers. Poor guys would dig their heels in the best they could though. Then maybe have a few sparring matches with pine needle swords to make up for it.

(thanks to @torchmlp for the reference of smol Jacob’s strength) 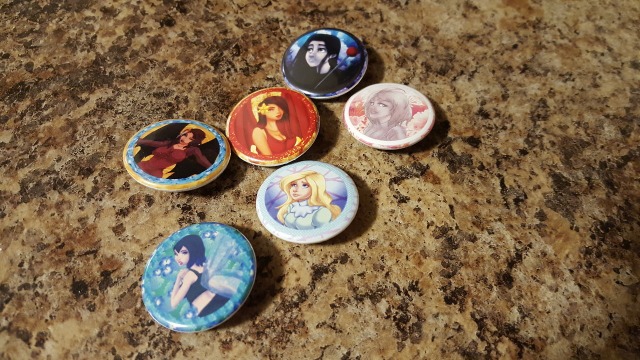 Jessica-Rae-3 sent me the buttons of my characters for christmas! They came out great!

Once Sam was down on the surface of the table, Jacob opened the bag to find the aforementioned laptop. He set it down and opened the top, marveling that someone who could curl up to nap on the trackpad had instructed him to set it up. Usually, his encounters with smaller folk didn’t involve much technology unless he wanted to hear all about how it had to be run by magic of some kind. Bowman didn’t believe that something could run on the same energy that sparked in the sky during a storm.

He also left Dean’s notebook near the computer before taking the bag and stepping back. It was hard to look away from someone so small who didn’t care how many corners everything had.

Why would he care? He’s not a sprite, he’s from places like this.

Jacob had always been something of an outsider in the village, owing to his huge size compared to its leafy-winged residents. It was strange to stand by and watch another human leaning so close to one of the home trees.

It was like getting an outside view of how strange he looked among the village.

He was a bit jealous that Sam, by contrast, fit in so well that he could walk right into that house. The most Jacob could manage would be to poke a few fingers through a window at the most. He and Dean wouldn’t be able to fit their hands through the doors.

With the eclipse going on, I couldn’t help thinking about what the sprites of Wellwood might think if the sun turned black for a few minutes in the middle of the day. Since they don’t have much reason to know what orbits are, they definitely wouldn’t make the connection that it’s the moon getting in the way.

Wellwood was a heartbeat of nervous energy. Cerul stood on the balcony of the cottonwood tree after the last twitchy-winged, concerned mother had fluttered back to her home tree. At last it seemed the tide of endless questions (mostly the same one) had ended. The sky and the air itself took on a strange tint as the last of the black disk slid over the sun far above them.

He only hoped he’d given the right advice. By the currents of worry on the air, he wasn’t sure.