Nixie’s eyes darted from sprite to sprite, searching for the one in charge.

Dean drew Sam close to his chest, green eyes wide at the sight of the blue, protective barrier that wrapped around them in an orb and separated them both from the fiery blaze. Glimmering blue droplets hit the brothers with light splashes, helping to soothe the burns they’d acquired in the time they’d been under assault. Nixie did what she could, but none of the water was from a fresh spring, cutting down the ability to heal to almost nothing.

Before she could discover which fire sprite was controlling the rest, one separated from the swift whirlwind of sprites. Red eyes glittering, the sultry young sprite glared at she who was interfering. “Nixie. This is interference. You must stop.” She drifted over to the barrier, brushing her fingers against it. “You are bound as we all are to not interfere with other sprites. You must submit to me. My purpose is primary.”

“Ilyana!” Nixie said, her voice full of natural command as she beheld her youngest sister. “You must cease this attack. These humans are the ones that stopped our dark brother at their own peril. They have earned our thanks, not our anger.” She drew herself up in the air, hanging motionless with her wings spread. With the amount of magic she was channeling she had no need to flap her wings to remain suspended in midair.

She gave Ilyana her most confident stare. “I do not attack, and I do not submit. I stand in your way, sister.”

Picture commissioned from the wonderful little-miss-maggie 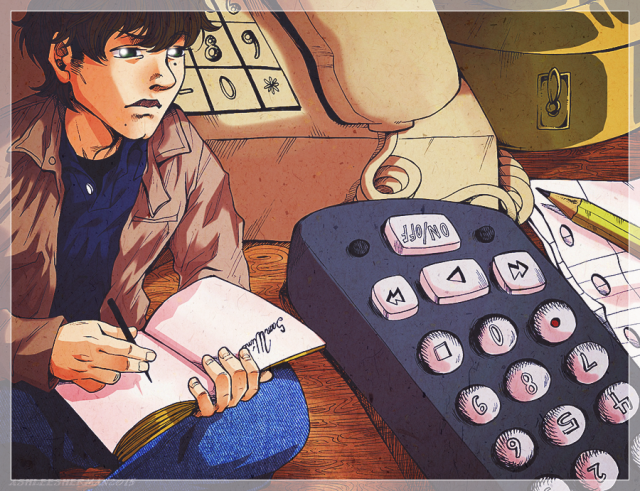 Breaking in His New Journal

The early morning sun found Sam perched on the nightstand, legs dangling off the edge as he watched a news report from a state away. The shower ran in the background, filling the air with the reassuring patter of water. It washed away the disturbing silence that never failed to unnerve Sam after his recent abduction. The tiny scrapings of a lockpick in the door continually sounded in his head when he was left on his own. Like now.

On the television, a helicopter cam panned over the landscape, showing the destroyed half of a town, crumpled wreckage everywhere.

“Confusion runs rampant as the town has been declared unsafe for habitation. The earthquake last week coincides with the tornado yesterday down to the exact date and time, spreading rumors of a town-wide curse that afflicts it all. All superstitious notions aside, evacuation procedures are being followed by the mayor.”

Sam frowned to himself as he contemplated the report. Two natural disasters, spaced apart by exactly seven days, down to the second? “Definitely not natural,” he muttered under his breath.

He brushed a hand over the new journal sitting on his lap, loving the leather covering on it. There was still room in his older journal, but he was eager to break in the new one. The pages were even gold leafed, giving the small book a professional feel.

He opened it to the first page. While Dean was in the shower, Sam filled in his name, claiming the book as his own in delicate handwriting that humans couldn’t read without a magnifying glass to help. Sam Winchester. After a moment of hesitation, at the bottom of the page, in bold lettering, he put If lost, return to Dean Winchester, figuring it couldn’t hurt to have a back-up plan in place if it ever got lost.

No one knew who Sam Winchester was, after all.

Wonderful artwork commissioned from foolscapper. If you want to see more wonderful Sam art, check out asksamstuff, the blog she runs. 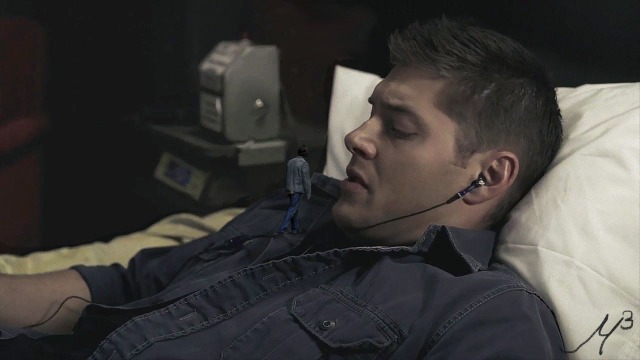 Now that Season One of Brothers Apart is over, the boys will have more obstacles to face and will need to work together as a team like never before!

Here’s a snippet from the upcoming eighth part of BA: The Schism of Fire and Water

(Warning: words and phrases may change before the chapter this is a part of is released)

Sam realized that Dean was doing anything but sleeping. His face had the familiar stubborn cast of a person trying to ignore the world around them, instead of his usual relaxed posture. The reason he hadn’t reacted to Sam became clear when he caught sight of the earbuds in Dean’s ears.

Dean just wasn’t going to make this easy on him.

With a world-weary sigh, Sam jogged over to the bed. If Dean refused to listen to him, he’d find a way to make Dean listen, whatever it took. A brief shiver went up Sam’s back when he remembered how big Dean was, but it faded away faster this time.

Sam grabbed the edge of the bed cover, hauling himself up the sheer cliff with no need for his fishhook or line. A climbing surface like the cover offered plenty of handholds and places to grip. He was careful to stay clear of the hand that was hanging off the bed, spotting it silently twitching in time with the song Dean was listening to at the moment. He didn’t want to get knocked off the bed by accident.

Once he made it to the top of the bed Sam wasted no time in climbing up Dean himself. He felt the hunter freeze up under him the second he made contact, then smirked as Dean tried to force himself to relax and ignore Sam. You already gave yourself away, jackass. That wasn’t exactly your most subtle move. I know you’re awake and you know I’m here.

Sam jogged up Dean’s stomach, ignoring the way the uneven ground gave way beneath his feet. That was normal enough for him these days. It was hardly the first time he’d walked on Dean, though it was the first he’d been ignored while walking up. For all the good that would do Dean. Sam felt a spark of determination fill him. Dean would listen to him.

With that in mind, Sam brought his boot down on the cord of Dean’s headphones, yanking one of the buds out of his ears. Dean’s eyes flashed open before he could catch himself, an annoyed look in his stare when he caught sight of Sam standing on his chest with arms stubbornly crossed over his chest.

“Dude, you’re standing on my headphones,” Dean grumbled, the ground under Sam vibrating. The quiet sound of Smoke on the Water leaked out of the free bud.

“Yeah. That’s kind of the point,” Sam said, meeting Dean levelly in the eyes. “We need to talk.”