Dean scooped up Stan and the plate in one hand, balancing the apple pie on the tips of his fingers, and snagged the laptop with his other hand. The laptop got plopped at the foot of Dean’s bed, quickly followed by the pie and then Stan, and Dean stretched out on his stomach so he could see the screen close up.

It was to no one’s surprise that Sam was still hunched over his books when they returned, not only pie but an order of Chinese food in hand. Dean shook his head as he set the huge brown paper bag down on the table, covering up half of Sam’s work.

“Going to take a break,” Dean interrupted, putting the pie down next to the bag. “You ain’t doing us any good if you work yourself into the ground.”

Against his judgement, Stan leaned out from his corner a little to survey as much of the area his limited window revealed. While the interior wasn’t anything like he remembered, he recognized the basic elements. Like the case full of pies that Dean was inspecting. It was so odd, seeing pastries that always looked to huge and untouchable in his few memories, but from the human’s perspective.

As if Stan hadn’t already been salivating from the smells alone. They looked all the more appetizing from Dean’s angle.

“Last stop,” he said, parking along the street near their final destination before returning to the room to see what Sam had made of his day. “I think this one you’ll like.”

As Dean stood out of the car, the smells that came from the building they were in front of made it clear where they were. The scent of freshly baked cookies and pies permeated the air, and Dean took a deep breath. “Best place on earth.”

Dean’s eyebrows went right up and stayed up. “You never had any pie? ” he asked, his voice half disbelieving and half almost reprimanding. “Dude, you are missing out!”

Two commissions for @nightmares06!! Looks like Dean is having some… trouble. With things. 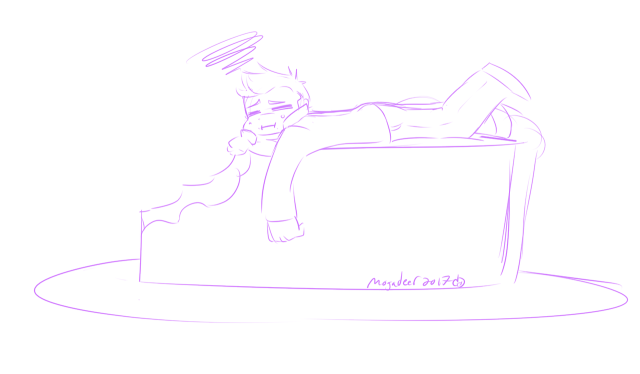 Flash chibi sketch for @nightmares06! Someone ate too much

The Ko-fi flash sketches are still open, so get one if you want one!

I’ll be writing more with these two, and we’ve already mused about Oscar’s reaction to this size-swapped pair, so this may be seen in the future, either as a full story or prompts!

These two brothers will likely butt heads about the rabbit food from time to time, and Sam can’t force Dean to eat like he does, so one way or the other, Dean will find a way to get his bacon cheeseburger and pie.

It’s either school or staying in the room on his own (or with dad), so there’s a good chance Dean will be off to school.

Ahaha. Well that all depends on if BL Dean has his baby or not. Jacob’s Mercury is nice, but it just isn’t the same as the Impala. Sam will suffer through an old rock binge either way. But with the Deans…

BA Dean is probably going to chase Jacob off since he’s like 6′5″ and who the hell does this kid think he is. Meanwhile BL Dean is all puffed up and offended that anyone is ordering his Jacob around, doesn’t Dean know they’re working on training him? Jacob’s in the corner watching BA Dean curiously poke the tiny version of himself, wondering about how tiny he is, while Jacob’s shaking his head going “I wouldn’t do that if I were you…”

Cue tiny Dean bitching at big Dean from a shoulder and that’s where they get to “My human’s bigger than your human…” and suddenly tiny Dean is a lot like a squirrel. He’d even throw stuff from there if he could to get his point across.

Sams are just sitting back and watching the show, and if anyone mixes up their Sam, they’ll let them know. There are differences between the two that Jacob will probably pick up on. Sam in BL doesn’t have his human older brother to help him out with figuring out humans, so he’s a lot more shy. Dean might not notice this as fast since he’s offended that the little version of him just used a knife on his finger. How dare XD

Eventually they’ll all settle down and yep. Pie. Tiny Dean would be jealous big Dean can eat an entire pie in one sitting. At least they can agree on liking pie.

What everyone should really worry about is if the Deans decide to start working together….