Only as much as full sized Sam is larger and stronger than his older brother!

On the same size scale, the brothers are as equal as they are in canon. Both receive the strength boon that borrowers get.

Compared to a human at the same size, they’re both around 12 to 13x stronger. With training and proper nutrition, they’ll be closer to 17x their regular strength. So if Dean wanted to, he could dangle Sam by the nape of his neck just as much as Sam does.

He just happens to be shorter, so it’s nowhere near as easy, ffs. Stop that, Sam! 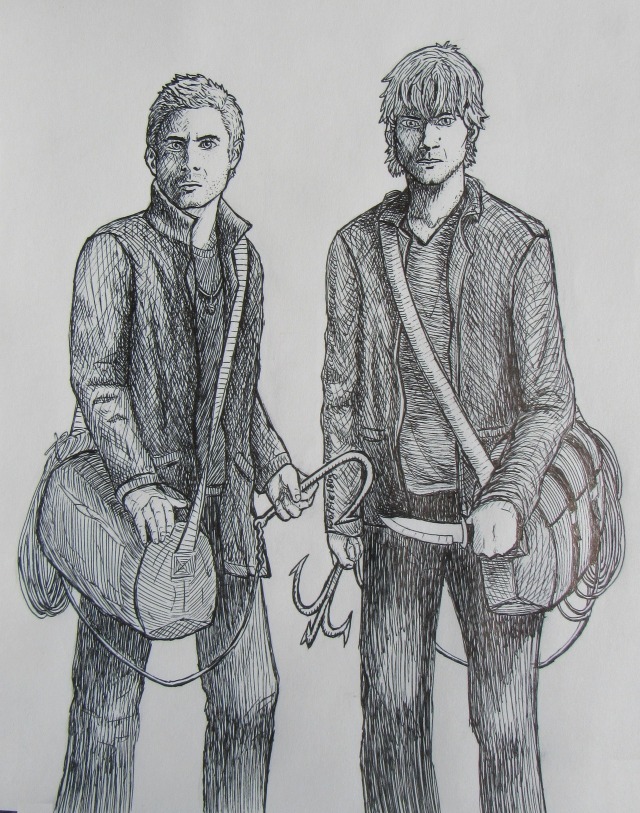 I drew this a few days ago. I just love the brothers as borrowers!

Last but not least and never forgotten, There’s No Place Like Home!

Idly stretched out along the margins of their dad’s journal, Dean slid his whetstone along his knife, admiring the silver gleam that caught the light while Sam frowned down at a passage in John Winchester’s heavy-handed scrawl.

They’d spent most of the morning and the beginning of the afternoon like that. Dean got his exercise when Sam needed to turn the page, and Sam persisted in trying to kick him out of the way instead of letting him get up on his own.

They always found their own balance.

Both of their bags were left off to the side, next to the journal. Once he was done checking over his own knife, Dean was planning on going over Sam’s just as assiduously. They needed to keep the only weapons they owned in tip-top shape. They couldn’t risk the precious knives for anything. Any other weapon their size wouldn’t come close to the craftsmanship or quality. Dean would be damned if he let Sam’s weapon fall out of repair, the best defense his little brother had against the too-big world.

Sam arched his eyebrows in Dean’s direction. “Thinking? You do that?”

“Smartass.” Dean stared up at the ceiling high above. He had one leg casually kicked up on a knee, and was lying flat on his back. “But anyway, I was thinking we might want to see if we can get Jacob some more practice on the guns. He could use it.”

Sam shrugged, walking past Dean. He whapped Dean’s boot with a hand as he passed, making Dean briefly flail when his balance was lost. “We’ve got some time while we’re in town if there’s any gun ranges around. I doubt his parents or the neighbors will appreciate it if he starts taking potshots at cans in the backyard like at Bobby’s.”

Sam never found out what he was going to say.

The sound of footsteps trudging up the stairs made it through the walls. Dean twisted to look towards the door, only faint concern on his face. It was early for Jacob to be back, but the cadence and floor-shaking impression they could feel was nothing like how Mike and Mariana walked around the home.

Sam turned as well, but a shock ran up his back. The world almost dropped away as the door was tossed carelessly open, slamming against the wall and nearly jarring them from their feet.

The figure wasn’t as tall as the human they’d grown used to seeing over the last few months. He was thinner, too, not nearly as muscled. His head was topped with pale blond hair and his eyes were blue like ice. Aside from the arrogant demeanor of someone that clearly thought he owned whatever ground he walked on, one fact darted right through the brothers’ hearts like steel bolts.

Things on the side of the walk weren’t an unusual sight at all, especially in John’s part of town. There was always a little rubbish someone missed, toys or other belongings some kid might have dropped earlier in the day that got swept aside.

So when John noticed a small figure huddled against the wall, his gaze downturned thanks to the precipitation, he passed right by it with hardly a question.

A few steps away was a crossing, which had just turned in the direction that John wasn’t heading, so he shoved his hands in his pockets with a sigh and waited patiently for the light.

Boredom struck quickly, and curiosity brought his attention sliding back the way he’d come, to that strange figure in the snow. He didn’t understand why until he thought about it; whatever it was, was small enough to be a toy. But a fallen toy wouldn’t manipulate itself in such a position.

Curiosity won out, and with a glance back at the traffic lights, John meandered his way back to check out what was over there.

Frowning thoughtfully, John crouched down for a better look. He wasn’t around children often, but he’d never seen toys quite like these.

It seemed to be two figures, clinging to each other in the snow. Too lifelike to be simple playthings, and he couldn’t see any telltale joint mechanisms to allow for movement. Perhaps it was some kind of subtle art piece, a political statement maybe.

John couldn’t quite tell. After a moment of thought, he took one hand out of his pocket and reached out to brush a bit of the thin layer of snow off this supposed street art.

Dean heard the footsteps returning after the most recent giant passed by. They shook the ground under him, how could he miss such rumbles?

Darting one glance towards the shadow he could see moving along the walkway, Dean pulled Sam closer, his arm protectively curled around his little brother’s body to keep him close. Whatever happened, he couldn’t afford to be split apart from Sam. After months in captivity, they’d escaped together, and had each other to rely on in a completely alien world from where they’d grown up. Dean refused to let Sam slip away from him after coming so far.

With the shadow rapidly approaching, it was for the best that Sam was out cold. There was even less of a chance that anyone would realize they were alive if they didn’t move, and the younger kid had less self-control than Dean.

The footsteps slowed and came to a stop about a foot away, and Dean saw the massive shape crouch down, looming over them both as the stranger leaned in to see them better. Shoes bigger than both brothers together crunched against the snow.

Dean stared up at the giant. Keen blue eyes looked them both over, vaguely interested and strangely piercing at the same time. He willed himself to keep still, trying so hard to avoid notice, but deep in his heart knew it was too late. Whoever this stranger was, he’d found them. If they were lucky, he’d pass them up as two broken toys on the street. If not… Dean hated to think of Sam back in that cage again.

His words from before, said to reassure Sam, were coming back to bite him as a hand reached for them.

Dean absently hummed the music from Smoke on the Water as he slipped behind the trees, going deeper in. Only a few stray rays of sunlight made it this deep into the trees, the rest of the area lit by a deeper green from the leaves blocking the light. Once he was sure Logan wasn’t following, Dean relaxed with a sigh. “That wasn’t in the plan,” he muttered to himself, and to his tiny brothers, who could finally come out.

Oh, that is an adorable idea! We’ll have to keep it in mind (Jacob certainly ends up with a brother on either shoulder from time to time and they do so love to bicker; I’m sure it’ll happen to Sherlock and John at some point in the future). Complete with getting jabbed if the neck if he goes with the other’s idea. Now who’s the devil and who’s the angel?

This is mostly personal preference, but also combined with how their characters react to the sizes, and staying in character with Dean at all times.

I personally love the protective older brother dynamic from the television show, no matter how many times Sam proves he’s a badass (Sam Fucking Winchester, ladies and gents, don’t mess), Dean always goes all out to help his little brother. It’s a hard dynamic to achieve when Dean’s the size of Sam’s finger, and it makes staying in character as Dean more difficult, though I’ve had some success with Cursed Dean. Having both brothers tiny is also a favorite of mine, so you’ll see more of that for sure.

We’ve bounced around ideas for tiny Dean and big Sam, but nothing in the immediate future.

“Told you this was a bad idea,” Sam hissed at Dean, watching John lift a pile of paper into the air that most likely weighed more than the pair of them together.

Dean rolled his eyes. “Him? He’s harmless,” he said. “Sherlock is the one we have to worry about.”

“But–” Sam’s protest cut off in shock when Dean pushed himself away from the side of the couch and went to stroll out into the open. It was too late for Sam to dive forward and grab his arm, and all he could do was watch Dean greet what was, to them, a giant.

Rumsfeld certainly had a time seeking out Sam and Dean while they were busy hiding in the walls… Dean finally had to give in and give him scritches in the end.

From The Road Not Taken.

Artwork by the wonderful @homeiswheretheheartsare!

The sharp sound of someone clearing his voice came from behind, and Dean twisted around in surprise. Sam was standing on the edge of the shelf with a disapproving frown on his face. A boot dangled from each hand.

“What are you, my mother?” Dean griped.