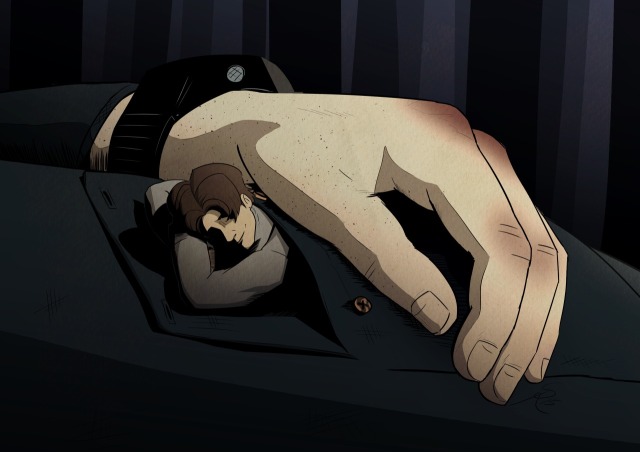 Sam gave his arms one last stretch before gathering up his satchel again. “See you bright and early, or whenever you flop out of bed,” he said to Bowman before turning away.

Dean’s body stretched overhead, even flat on his back, so Sam grabbed fistfulls of Dean’s shirt, hauling himself up the hunter. The black flannel shirt Dean was still wearing had a comfortable pocket, the perfect size for Sam to use as a sleeping bag. He’d never tell Dean this, but he sometimes preferred sleeping in there. After a lifetime of being raised to fear humans and after being captured and almost sold off by humans not so ago, sleeping on Dean, Sam’s only real source of safety in world, comforted him.

Nowhere else existed where Sam could guarantee his safety like that. Dean’s rhythmic breathing and the gentle thudding of his heart underneath his body helped soothe him as well.

Once he’d climbed up, Sam walked briskly over, lifting up the pocket flap. Dean rumbled in his sleep as Sam slipped in, getting comfortable. The ground vibrated under him reassuringly.

Dean must have felt Sam climbing his side, because the hand Sam had been sitting on moments ago rose up, stretching protectively over the pocket and Sam. “G’night Sammy,” Dean mumbled before he slipped into sleep again.

Sam smiled. “ ‘Night Dean,” he called up as well, settling comfortably under the shadow of the huge hand. Dean’s thumb rubbed gently up his side once before going slack.